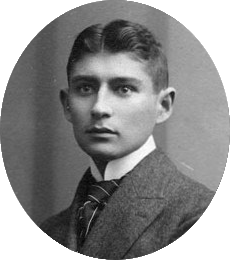 It should come as no surprise that the works of Franz Kafka are regularly found on the reading lists for German studies at universities.

Kafka's language is most often:

Kafka's writing typically avoids regional dialects and colloquial or informal usages. There are few instances where he deliberately breaks the rules of grammar, and when he does it is most often confined to small snippets of dialogue where the mannered speech helps to define one of his characters.

As a result, Kafka's language is closer to everyday modern German than even many of his contemporary literary authors. Consider two of his popular near contemporaries: Friederich Nietsche, and Thomas Mann; both authors use very large literary vocabularies. By all means, students of the German language should read widely, but the works of Franz Kafka is the ideal place to start. If your eventual goal is to read philosophical or literary texts, it will be much easier if you have built up your skills using Kafka's everday German language.

Is there a subject you want to know more information about? Please tell us.